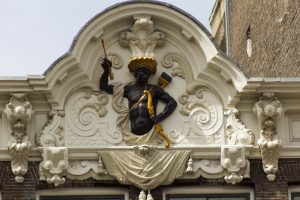 Historical background
Amsterdam enjoys a particularly interesting bond with its former colony Surinam. After the conquest of Surinam by the Zealanders in 1667, the Dutch West India Company (WIC) first took over control, soon to be succeeded by the Sociëteit van Suriname (Surinam Society). In its capacity as shareholder in the Surinam Society, the city was one-third owner of the territory, the remainder being in the hands of the opulent Van Aerssen van Sommelsdijck family and the West India Company. At one stage, Amsterdam was even two-thirds owner of Surinam. In this capacity representatives of the city met with other owners and merchants, among other places at the Amsterdam City Hall (now the Royal Palace at the Dam Square) and the West-Indisch Huis (West India House) to discuss their possessions.

The majority of Surinam plantation owners and shareholders lived in Amsterdam and here too the financial decisions such as the floating of shares and signing of insurance deals were taken. Many WIC officials also were also representatives in the municipal government. Colonial iconography from colonies in the East and West started to appear on gables of Amsterdam homes.

Traces
In the twentieth century many descendants of the former enslaved settled in Amsterdam. Through the centuries they have, with the celebration of Keti Koti (‘break the chains’) and the commemorations of the slavery heritage, shaped their own history. This history is being increasingly shared with a broader public. The national monument of slavery heritage was erected in Oosterpark in 2002 and the commemoration and celebration of the abolition of slavery is gaining in popularity every year.

Amsterdam holds many traces of the Dutch colonial era and the days of the East India Company and West India Company. Its headquarters were located in Amsterdam. The Black Heritage Amsterdam Tour, developed by Jennifer Tosch, leads visitors to these places and histories and also points to the black presence in Amsterdam through the centuries.

Are you curious about slavery heritage in different regions? Take a look at our other maps.

Based on Gids Slavernijverleden Amsterdam
Copyright