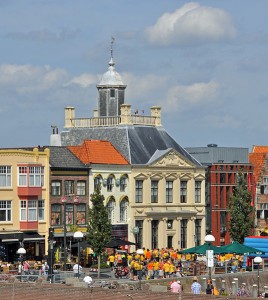 Historical background
The province of Zeeland, with Walcheren as one of its islands, is intimately tied to the history of slavery and slave trade. Important chambers of both the WIC and the VOC were located in Middelburg, supported by harbours in Vlissingen, Rammekens and Veere. It is estimated that ships leaving from Zeeland transported around 270.000 Africans to the Americas. We do not have a similar estimation of Zeeland’s influence on slave trade along the Indian Ocean route. People from Zeeland owned plantations in Suriname, Guyana and Bernice.

In addition to the WIC and VOC, Zeeland had an additional slavetrading company: the Middelburgsche Commercie Compagnie (MCC). Together, these businesses provided great economic prosperity to the area from around the 17th up until the 19th century. They provided a lot of jobs in the harbours, their warehouses and headquarters. The Zeeuwse Archief holds the important archives of the MCC, a unique collection.

Traces
Even though the Second World War, several fires and city planning changed the layout and architecture of the cities on Walcheren, warehouses and an occasional office of the MCC, WIC and VOC can still be found scattered throughout Middelburg. In addition, rich slave traders, plantation owners or investors owned the most beautiful houses throughout area. Middelburg also has its own slavery monument, initiated by descendant communities in Zeeland.

Curious about slavery heritage in other regions? Take a look at the overview of our maps.