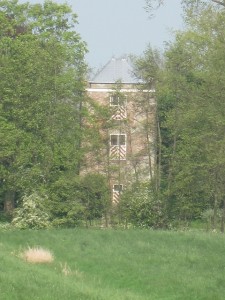 The first country houses and estates along the Heuvelrug were established towards the end of the seventeenth century. This process was accelerated in the nineteenth century when the heaths were reclaimed and forestation started. The number of country estates increased significantly with the paving of the road from De Bilt to Rhenen. Some 80 country houses can currently still be identified in the southern region.

The link between the region and the VOC and the WIC was established with the emergence of the country estates. Dynasties which had accrued wealth through trade or investments in the East and West started to invest increasingly in personal aggrandizement. The country homes in the vicinity of the city of Utrecht (as do those in Amsterdam) provide tangible testimony to this.

Traces
The cycling tour running along the Utrechtse Heuvelrug not only clearly illustrates the existence of ties between The East and The West, but also the diversity in status and character of these links. Hence the Hasselaer family, owners of Groeneveld Castle in Baarn, had large interests in both the VOC and the WIC. These interest lasted centuries long, for instance we know that Cornelia van Limburg Stirum (Beukenburg Estate) was compensated for the ‘loss’ of freed slaves at the Emancipation of 1863.

Voices of dissent were heard here as well. Eugène van Tuyl van Serooskerken (Vollenhoven Estate) was secretary-treasurer to the Maatschappij ter bevordering van de afschaffing van slavery (Committee to Promote the Abolition of Slavery). At the height of its popularity in 1857, this committee counted around 670 members throughout the Netherlands.

Kosmopolis Utrecht initiated and led the research for this map in 2014, assisted by intern Eveline Sprangers.