Traces of slavery in Utrecht 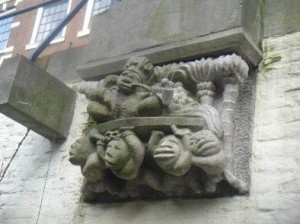 Historical Background
The city of Utrecht got city rights in 1122 and was a thriving, prosperous city in the Middle Ages. Though Utrecht itself never played a role within the VOC (East India Company) or WIC (West India Company), its location had always enabled the city to fully benefit from the wealth trade with the overseas territories brought.

Dug in the 10th century, the Oudegracht canal connected the Vecht river to the Kromme Rijn, thereby linking up waterways round Amsterdam with the Rhine Delta. This facilitated the south and eastward shipment of commodities from Amsterdam. Utrecht profited from the opportunities for storage and trade.

As trading hub, it lured many who had accumulated wealth through enterprises with the East and West Indies. Also the enslaved who were brought to the Netherlands and were by Dutch law free from serfdom and therefore free men and women, established themselves in cities such as Utrecht.

At the end of the 18th century, the French Enlightenment brought ideas on the equality of man over to the Netherlands. This was particularly expressed in the growing opposition to the power and wealth of governors and regents but also in the realization that slavery was in itself degrading. Utrecht was one of the cities where patriot opposition led to rebellion: in 1786 the city council of Utrecht was disbanded. In spite of being crushed with the support of Austrian troops, the insurgence signaled the beginning of the end. A mere 10 years later the Batavian Republic was born.

Established in 1842, the Nederlandsche Maatschappij ter bevordering van de Afschaffing der Slavernij (Dutch Committee to Promote the Abolition of Slavery) had found in Nicolaas Beets and a number of other prominent Utrecht residents important champions of the abolitionist cause. The sphere of the organization stretched beyond slavery in the Dutch colonies: money was also collected for emancipated slaves in the USA. Still it would take more than twenty years for slavery to be abolished in Surinam and the Antilles in 1863.

Traces
If you look closely there are several buildings and gables that point to the colonial history of the city. Kosmopolis Utrecht, initiator of cultural project Traces of Slavery Utrecht in 2011, organizes regular city walks that focus on traces of slavery in Utrecht.

Curious about slavery heritage in different Dutch regions? Take a look at our other maps.

Based on the guide book Traces of Slavery in Utrecht
Copyright