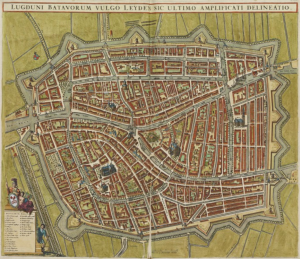 Historical background
Leiden was merely a small player in the triangular trade. Still, the city’s history is connected to the Dutch slavery past. For example, a ship called Leijden sailed between the Netherlands, Africa and Brazil. Textiles from Leiden were traded for enslaved Africans on the West-African shore. They were shipped to the Dutch colonies in the Caribbean, from where sugar and coffee were shipped to Europe. The name Leijden was also used for a plantation in Surinam.

The university was the most distinctive aspect within the city itself. It would later present itself as ‘Praesidium Libertatis’, bulwark of freedom. There definitely were professors from Leiden who actively committed themselves to abolitionism. However, the university also housed many explicit supporters of slavery and slave trade.

Research has predominantly shown that the university, the city government, and the churches for centuries did not give any incentive for critical reflection on slave trade and slavery. This cannot be explained by a lack of knowledge on the subjects. There were regular entries in the Leidsche Courant (The Leiden Gazette) about enslaved people for sale, the first initiatives of abolitionism, and once in a while about revolts from enslaved people. Leiden remained indifferent until far into the nineteenth century.

Traces
The involvement in slavery has also left its traces in a rather marginal city. For example from black people, whether or not enslaved, who lived in Leiden. Additionally, various administrators and entrepreneurs from Leiden were directly involved in the Atlantic slave trade and slavery, whose houses and/or country seats can still be seen.

Karwan Fatah-Black is assistant professor of social and economic history at the university of Leiden. Currently, he conducts research into slavery in the city and the rise of the Afro-Surinamese community in Paramaribo