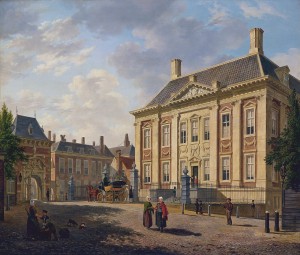 Historical Background
The Dutch government, residing in the city of The Hague, issued legislation governing all Dutch territories. So-doing, the city was both the venue for the protracted abolition of slavery on Dutch territory debate as well as the city of vacillation. Does an enslaved on Dutch territory enjoy the same legal rights as a Dutchman? Was a union between an emancipated black woman and a plantation owner legally binding? The parliament of the Netherlands regularly had to come up with answers to questions such as these. A case in point being the marriage of Elizabeth Samson (see map Den Haag).

Traces
The Hague also is the city where the legacy of the slavery past is openly discussed. The controversy surrounding the construction of the Mauritshuis compelled the museum to react openly. And: will a minister ever offer public apologies for this chapter of our history?

The capital city is to unveil a monument to slavery in the near future. Campaigners for the monument have already underlined the fact that the monument is to be not only one for the descendants, but also to the many indentured laborers who were often lured by empty promises into migrating from China, India and Indonesia,to Surinam in order to replenish the lack of manpower left on the plantations in the wake of the abolition of slavery in 1863.

Curious about slavery heritage in different Dutch regions? Take a look at our other maps.