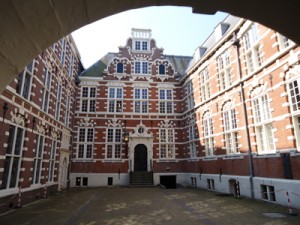 The East-Indian house served as an office for administrative and accounting functions for the Amsterdam room of the VOC.

MappingSlavery.nl gives a broader audience access to traces of the Dutch slavery heritage. The project lends the slavery heritage more immediacy through the description of places in the direct environment of contemporary Dutch citizens.

By collating data pertaining to the slavery heritage and translating it to  digital maps and walking tours, the Dutch slavery history is literally brought closer to home. We furthermore wish to make this basic information available for educational purposes.

Recent debates on slavery, Zwarte Piet (Black Peter) en racism have highlighted the underlying links between these issues. This leads to an increasing need for concrete information concerning our slavery heritage.

A firm connection to the slavery heritage in cities such as Amsterdam, Hoorn, Rotterdam, Middelburg, Vlissingen does exist, as much as it does in other cities where Chambers of the VOC and the WIC were seated.

Through engaging the international pendant Mappingslavery.org we reveal transnational links made by the Dutch in past centuries carrying evidence of slavery and trading. The Dutch project is – among others – inspired by the British research project ‘The Legacy of British Slave-ownership’ by the University College London.

In 2015 an exploratory project on the Dutch slavery heritage in New York (New Holland and New Amsterdam) was done. Projects in Suriname and Indonesia are being prepared.

De Verenigde Oost-Indische Compagnie (VOC; Dutch East Indies Company) and the West-Indische Compagnie (WIC; Dutch West Indies Company) nearly multinational European enterprises with fortresses on the African, American and Asiatic coasts. The sailing vessels of the trading giants WIC and VOC set sail from Dutch harbors laden with products destined for trade on the African Coast. Slavery was one segment of this trade.

Decisions regarding military escorts for the slave ships and the daily running of the WIC and VOC were taken by governors in Dutch cities.

Products including sugar, coffee and tobacco, cultivated by slave hands, were processed and traded in the Netherlands. These products were also consumed outside the trading cities. Merchants, regents and governors built country houses with the profits. Investors in the colonial economy – and thereby directly or indirectly in the trade and exploitation of slaves conducted there – came from all over the country. This means that several cities in the Netherlands are historically linked to slavery.

Hard evidence for the existence of slavery was hardly visible in the Netherlands itself as it all took place in the distant colonies while slavery was officially outlawed in the motherland. The enslaved only rarely came to the Netherlands. Just a very small number of the men and women deported from Africa and Asia, including their progeny, ever visited the Netherlands or lived here during the slavery period. But they certainly were present. We know this, amongst other reasons, because Rembrandt had painted a number of them. Focused research in local archives increasingly finds related traces and connections.