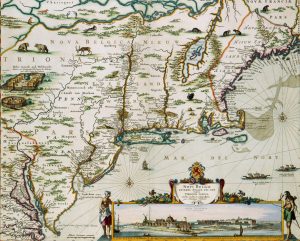 Historical Background
The Hudson River carries the name of Henry Hudson, contracted by the VOC when he first sailed the river trying to find a new route to the Indies. Across the valley, originally inhabited by Lenape, Iroquois and Mohicans, Dutch and other Europeans settled.

By 1630, around 300 white settlers and 60 enslaved blacks lived in the Lower Hudson River Valley, about thirty of the enslaved were ‘company slaves’, owned by the WIC. Sailors and soldiers in the service of the WIC were a large group amongst the Europeans. Colonists not only originated from the Netherlands but also from other European countries such as Germany, Scandinavia, England, and France.

In 1658, Peter Stuyvesant wanted to stimulate moving to a new settlement north of Manhattan. Promising to assign a minister to a new village as soon as 25 settlers moved, moving to Harlem became attractive.

Traces
Spacious mansions in northern New York City reveal a past of wealthy families, some of which who would enslave people, like family Philipse, Van Cortlandt, and Dyckman. Remains African-American members of various churches in Manhattan were found under the 126th Street Bus Depot. Excavated in 2015, more than 140 bones and bone fragments were found.

Later, Harlem became the stage for important historical moments in black American history like the Harlem Renaissance and the Black Manifesto by James Forman. In the map below, these stories are told at important locations like “Striver’s Row” and the Elmendorf Church.