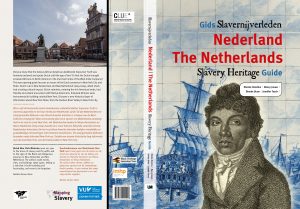 In December 2018 the newest in the series of publications by Mapping Slavery NL will appear. Unlike the previous publications the new ‘Gids Slavernijverleden Nederland / The Netherlands Slavery Heritage Guide’ will not focus on a single city or region. Instead, its focus is the slavery heritage of the Netherlands as a whole. For 18 cities and regions each, five prominent locations will be shown and a sometimes well known, but occasionally also unknown tale will be told. Next to these sets, there are five locations that have some national significance and five that have international connections. All in all 100 locations are shown. This way the Guide shows how widespread the connectedness to slavery was. Common denominator in all cases is the connection to slavery. This connection can be abolitionism, the ownership of or profiting from the labor of the enslaved, or simple the trade in colonial wares that were the result of slave labor.

The Guide is like previous publications bilingual and richly illustrated.  Apart from descriptions and maps on the various locations, the guide provides a number of thematic chapters that provide some necessary background on the Dutch slavery past.

The Guide will soon be on order at LM Publishers.