Suffragette at the Filmfestival Assen (a review) 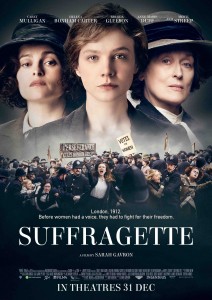 Last weekend, Assen (one of the bigger cities in the Netherlands) was home of a filmfestival, themed “Women in Film”. One of the movies played there was the big production Suffragette, starring Carey Mulligan, Helena Bonhem Carter and Meryl Streep. I was fortunate enough to go that weekend, and also attend the panel discussion following the film. The discussion was led by our very own Nancy Jouwe, and in the panel were Berteke Waaldijk (Professor and Education Directir at the Utrecht University), Mercedes Zandwijken (Keti Koti Dialoog Tafel) and Berna Toprak (Master student Gender&Ethnicity at the Utrecht University).

For me, it was the first time I had seen the movie, but I had heard and read much about it beforehand. However, for those who have no idea what movie I am talking about, I will give a short outline: The film is starring Carey Mulligan as Maud Watts, a lower-class working mother in London in the early 20th century. Slowly but surely you can see Maud’s “radicalization” into the suffragette movement: women striding for their right to vote. The movie shows very well how the movement was different for women of different classes, and what impact it had on women’s lives when they actually were affiliated with the suffragette movement.
However, the movie did lack in representation of a lot of other different aspects of that period. The biggest argument that came up in the panel, was the lack of proper representation of British women in the early 20th century, especially in London. Not one woman of color was shown during the entire movie, while black women definitely lived in London during that period. The under (or rather: non-) representation of black women in this case, made it seem as if their stories did not exist, as if their experience did not matter. The movie has indeed gotten critique about its lack of representation, but I have to admit I was quite surprised to actually see it in action like that. It was, in the end, nice to see a big production about this topic, but it was a shame that they only focused on the struggle of white women (and with that, discarding and ignoring the struggles black women had to go for for much, much longer). Because whenever we say “women got their vote in…” (enter a date), we actually mean white women. Women of color had to fight much, much longer before the society they lived in allowed them to vote, own a house or even have a bank account.

I was very happy to see that not only this discussion was held in the first place (because it is so, so important to talk about these issues of misrepresentation), but also to hear that the audience was actually agreeing and being very friendly. While I was afraid for a very heated discussion (since the topic of diversity can be quite controversial for some), I saw many heads nodding in agreement during the panel discussion. In the end, it was a very fun and informative evening. I got to hear other peoples’ opinions on the movie, got to hear arguments both in favor and against the movie, and got to see how such a discussion can help an audience think about particular subjects they would not have thought of before. I would like to urge everyone to, while at the same time enjoying movies, also try and look critically at them. Ask yourselves: What story is being told, and what stories are being left out? Who is telling the story, about whom and for whom? Because only if we keep this critical lens on, will we actually be able to make a positive change towards equal representation.