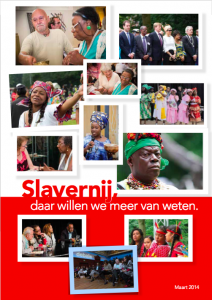 Report ‘Slavery, we would like to know more about that’, by Dineke Stam and Alex van Stipriaan

Mapping Slavery aims at educating about the Dutch Slavery history and the topic of education is frequently discussed within our team. Do we need more education about the history of slavery? Or do we only need to adjust what is already being taught? When should schools begin teaching their students about it, and within which contexts? In order to even come close to answering these questions, it is important to understand how the current Dutch educational system handles its national colonial past. Important aspects are for instance how teachers provide the children with information, and if there are any strict guidelines for teachers within their courses.

In The Netherlands there is still is a lot of ignorance and lack of knowledge when it comes to the Dutch colonial past. A lot of it has to do with education, albeit early or later on in life. However, since most of the “general” knowledge is often times gained in middle- and high school (especially when it comes to historical topics), this would be the perfect place to tackle colonial history and slavery.

Ineke Mok (founder of Cultuursporen, a platform for intercultural and educational projects) is one of the few who has actually researched the topic of slavery in the educational system. She’s written an important report for the city of Amsterdam, focusing on the attention given to slavery in secondary school history books, and the time given to the topic within the classroom. To do so, several teachers in Amsterdam filled out a survey on how much time they dedicated to the topic of slavery.

The report shows that the level and amount of education given to the topic (within the classroom) differs immensely between schools and education levels. While a sample of 16 teachers might not be fully representative of the whole of the Netherlands, the research does sketch an image of the education on slavery and colonialism. While, for instance, only 2 teachers dedicated more than 10 hours to the topic of slavery, the majority (total of 11 teachers) dedicated just 2-5 hours in total. The majority did cover both Dutch and US history, while only a small part dedicated more time to the Dutch history.

Not only do the didactic skills and goals of the teacher matter, there is also a big differentiation between the books used by schools. In the research done by Mok, only four of the most popular history books are analyzed, but of course there are many more that might be used by schools all over the country.

My biggest question after having read the report, was mostly: how can it be that this very important topic can be educated so differently? Are there no guidelines or things a teacher has to conform to?

So I asked Ineke Mok herself. What I found out of the conversation was that there actually are guidelines as to what should be tought in the course of a school year, depending per level and year. This guideline is called the “Canon of Dutch History”, and consists of a list of 50 subjects in order to teach the Dutch history in chronological order. However, and this is where things become clear: there is both a freedom of education, and a freedom of press in the Netherlands. This means that teachers get a certain degree of freedom in how they organize their lessons; for instance it is mandatory to discuss the history of slavery, but the teacher can decide for himself how long and what exactly do discuss. Also publishers have their own freedom as to how they want to organize a history book, which means in some books certain topics will be explained in more detail than others. These two important aspects of Dutch law explain why methods between schools can vary so intensely. This is not to say it is all bad, of course.

The same report also concluded that the education on slavery has made some very important leaps forward over the last few decades. While in the 1950s, for instance, often no more than one sentence was devoted to the Dutch slavery or colonial history, in 2011 there was a mention of slavery in every textbook, both about Dutch and US history. Also noteworthy is that the word ‘negro’ is often times replaced by ‘African’, which not only indicated a more heightened sense of sensitivity towards the topic of slavery, but also a deeper sense of respect for the descendants of enslaved people; which is very important for children to learn early on.

Education matters: as long as a topic is not or barely discussed, there is no awareness, stimulation for critical thinking and asking further questions. Especially with the topic of slavery, this is very important. The project Mapping Slavery itself shows: there are traces of the history of slavery still all around us. Both in our physical surroundings (buildings, statues, street names) as well as in our culture and the way we talk about thinks (think of the Zwarte Piet debate or the Gouden Koets). These traces and how we teach children to deal with them influence how these children eventually deal with racial difference and diversity in society. Historical education is important, because it is the best way to teach children where prejudices come from, and why they are so dangerous. It teaches them to understand the present by hearing about the past.

Professor Alex van Stipriaan (Erasmus University) has also addressed the issue of historical education back in 2014, and together with Dineke Stam they have made a report named Slavernij, daar willen we meer van weten (Translates: ‘Slavery, we would like to know more about that’). In this report, they have made many different recommendations for more attention to Dutch slavery history within Amsterdam education systems.

With the reports that are available, it is clear that there is still a lot of improvement to be made in the education of slavery and colonialism. The most important thing, I believe, is that teachers do not get very clear guidelines as to how much time they have to spend on these topics. While I do not want to argue that teachers should be told exactly how to fill in their classes (because freedom of education is very important), I do think a broader guideline would help. Especially since the importance of the topic is very much related to current issues, children should have the right to the same knowledge, no matter what school they are at or what teacher they have. However, in order to come this far, more research is definitely needed. Because for now, all we have are a few statistics – but not enough to make general assumptions on the whole of the country. And in order to make the change, data and knowledge is needed first.