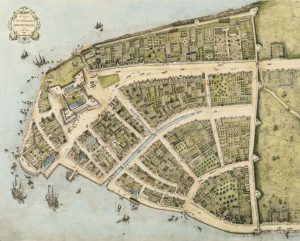 The Castello plan of Manhattan

Historical background
Mannahatta is the word for ‘an island with many hills’ in the Lenape language. The Lenape, Iroquois and Mohicans occupied the lands around the Hudson valley. When Europeans first arrived, they initiated friendly trade relations with the Native Americans. Exchanging of gifts was the main practice of interaction and building relations. The Dutch exchanged European goods with wampum (beads made of shells, used as currency) in the lower Hudson area and used this wampum alongside other goods to pay for beaver pelts in the Upper Hudson River Valley. Other exchange goods could be bread, shirts, stockings, knives, shoes, pipes, scissors, mirrors, guns, ammunition, and liquor.

Juan Rodriguez, born in Santo Domingo (present day Dominican Republic) to a Portuguese sailor and an African woman was the first documented non-Native American to live on Manhattan Island. In 1613 Rodriguez was hired by the Dutch captain Thijs Volckenz Mossel of the Jonge Tobias to serve as the translator on a trading voyage to Manhattan. Rodriguez had already set up a trading post, learned to speak the Algonquian language of the Lenape people and married into the local community. In the same year, the competing merchant Block complained bitterly about Rodriguez, saying that he had tried to “spoil the trade” by offering three times more for a beaver than Block did.

In 1626, a representative of the indigenous inhabitants “leased” Manhattan Island to the Dutch. The Dutch regarded this act as a permanent purchase of land, as they reported to the WIC directors in the famous letter by Schagen, on display in the National Archives in The Hague. Colonization started with thirty Walloon-Belgian families in 1624 and was soon followed by other groups of immigrants.

Traces
As the WIC’s chosen location for their headquarters ‘Fort Amsterdam’, Manhattan played a crucial part in Dutch New York histories. Nowadays, Dutch borough and street names make it difficult to forget Dutch influence in the region. Importantly, the discovery in 1991 by construction workers in Lower Manhattan of what is now called the African Burial Ground made New Yorkers reconnect to their slavery past as well. The map below highlights locations throughout Manhattan and the ‘Dutch settlement of Breukelen’, or Brooklyn, that remind us of interconnected Dutch, African American and Native American histories.