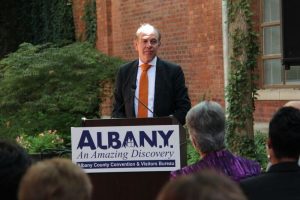 Rob de Vos, the Netherlands consul in New York City, speaking on the occasion of the launch of the Black Heritage Tour in New York State, in the capital, Albany, 5 August 2016.

Until recently, Dutch slavery heritage in New York remained underresearched. That is now changing due to a coordinated research project and the launching of public history and heritage tours on location. 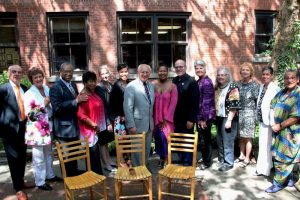 These activities are part of the VU research project “Mapping Slavery”, represented by Jennifer Tosch and Nancy Jouwe. This project is supported by Dutch Culture in the Netherlands and the US, the Netherlands America Foundation, and has a fast growing list of partnerships, including the New Amsterdam History center, New York State Parks, Recreation and Historic Preservation, and the New York State Division of Tourism of I Love NY. The meeting is part of the Vrije Universiteit Amsterdam research project “Mapping Slavery” (Faculty of Humanities, CLUE+).